Atlus's role-playing game Persona 4 revolves around a group of high school students who attempt to find the person responsible for the murders, kidnappings, and other crimes that occurred in the fictional town of Inaba on April 11, 2011.

The TV world is a dimension in which characters can use alter-egos known as "Personas” as a way to defeat Shadows. In order to get the most out of P4G, you need to get to know the characters and play in a way that matches both their and your style. For more information about the story, you can read out the Persona 4 Golden Story article or take a look at the review where we cover the game as a whole. But for now, let’s dive deep down into Persona 4 Golden characters.

All Playable Characters in P4G and Their Personalities

In Persona 4 he acts as a silent protagonist. As per series tradition. Except in instances when he speaks, such as summoning Personas or so, his personality is determined solely by the player. This is illustrated in persona 4 Gold. His dialogue choices seem to be very neutral. There is some humor mixed in with flirtatious and silly behavior. He is shown through his dialogue and actions to be more outgoing than the Personality 3 protagonist.

While he seems to have a solid moral compass there are several options for dialogue that indicate he could be mean if needed. He sometimes makes snide remarks that he believes are funny. He's also quite naive.

Teddie is bubbly and adorable and, just like Chie, is known for his ability to bring joy to the investigation team. Teddie is an innocent cartoon bear who has a lot to do with being a Shadow unfamiliar in the human world. He doesn’t know many human customs. This leads to Teddie having no social boundaries. He also has a lot of nicknames that he uses to remember people's names. The beginning of the game shows him acting cowardly when Shadows approach, but he gradually changes his ways throughout the story.

Teddie, despite his positive attitude, can occasionally feel sad or confused. His greatest fear is his own identity, which could lead to him feeling helpless and without a reason to be here.

Chie Santonaka is another Persona 4 playable character. A lively girl, she is a fan of kung fu movies and is one of the protagonist's classmates from YasogamiHigh School.

Chie, is energetic and outgoing, bright and positive, and will often try to cheer up others by telling them about the case. She can be irritable with Yosuke and she is slow to give up on a challenge. Chie is an ardent advocate for justice and someone who has strong feelings of compassion. Even when outnumbered she doesn't hesitate to act and speak out. Chie wants Yukiko to be protected and the main character first. She uses them as strong motivations to train her kung fu moves and challenge herself physically. Chie, though she may be considered fearless, is afraid of thunder, ghost stories, locusts (and other insects), and being alone in the dark.

Chie, in some ways, could be described as a "tomboy." She is obsessed with kung fu and a huge shopper of martial arts movies, particularly Trial of the Dragon. Chie dreams of becoming a police officer one day. Chie loves meat and eats a lot of it. Her biggest fear is her jealousy toward someone with a more successful background than her. This is just one aspect of their unhealthy relationship with Yukiko. Both of them are guilty of secretly hiding their true feelings from each other.

Yosuke is a playable character in Persona 4. He is the protagonist’s classmate at Yasogami High School in Inaba. He also happens to be the son of the Inaba branch manager for the Junes Department Store.

Yosuke is an inept transfer-student, who arrived six years before the protagonist. Jokes about his weak muscles and lack of strength are common. He can use blunt, two-handed objects like wrenches but is more comfortable with knives and kunai. The protagonist sees him crash his bike into the garbage can the first of many times. However, he ignores him. The protagonist does not help him until the second time.

He was deeply concerned about Saki Konishi, and he fell into depression following her death. Saki's feelings for him and the painful possibility that Saki never felt the same for him about Saki is a big part of his character development.

Yosuke does not think before he says anything, which causes him to stick his foot in the mouth of someone and insult them.

Rise Kujikawa, one of the main characters of Persona 4, is a well-known idol, who returns to Inaba in a brief hiatus. She is a first-year student at Yasogami High  School.

Rise used to be an idol. But she stopped working at her family's business for health reasons after Kanji was saved. She is tired of show business and is stressed because she does not know if the Rise she admires is the real Rise or the persona Risette.

Rise's greatest fear is her individuality. She is afraid that she doesn't know who she is and that her career is making this worse. Although she initially tries to escape this feeling, she soon feels unsatisfied. At the end, she realizes that the fake self she was presenting to others was just another aspect of her true personality. After realizing this, she decides that her career will be a true reflection of her true self.

Yukiko Amagi, a playable character in Persona 4, is the protagonist’s friend at Yasogami high school. Her family runs the hot spring in the area. Yukiko Amagi is an elegant and wealthy young woman, who is very popular with both boys and women. Yukiko's introversion at first is due to her inability to accept the role of the local Inn's Heiress. However, after being saved by the Midnight Channel, she grows more confident. She often scores high in exams.

She is also intelligent and frequently recites material with her best friend Chie. Despite her intelligence, she can have lapses in judgment and moments of clumsiness. Yukiko's fearlessness and indecision in dealing with scary environments and surroundings is a hallmark of her. Chie is disconcerted by this and finds it hard to believe that Yukiko enjoys horror stories. 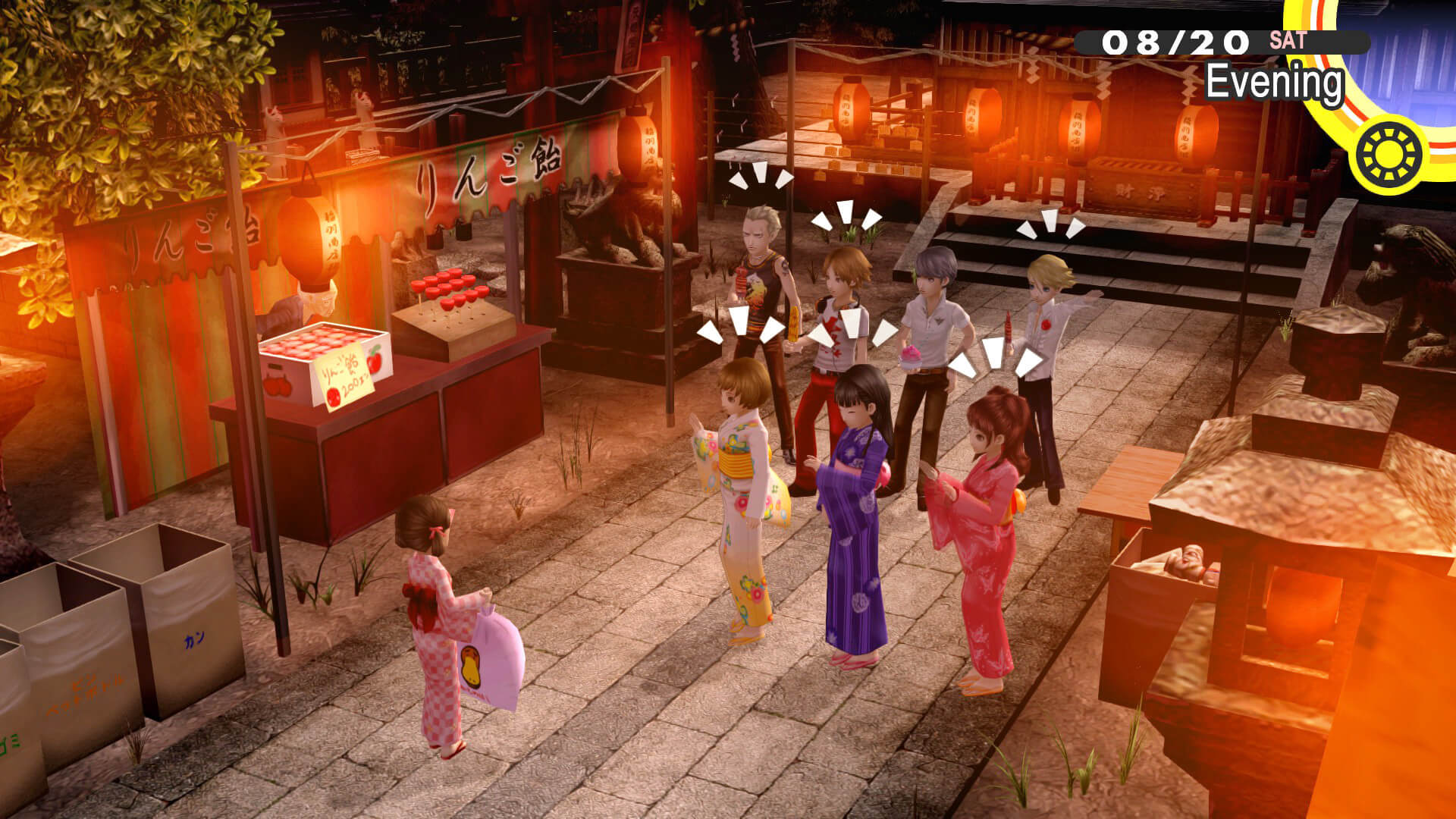 Naoto lost her parents in an accident in which she was just a child. Despite her young age, she is a mature orphan. Because she is the daughter of a respected family of detectives, she dresses in formal attire and has a deep voice when speaking. She is usually very serious, focused, and mission-oriented.

She doesn't joke around, which can make it seem like she is a party pooper or killjoy when her team gets into silly antics.
After some time, she becomes more connected to the team and warms up. She writes about the difficulties she faces trying to manage her detective work while also making new friends. She expresses concern that her work is always prior to her friendships, which shows how important her relationships are with them. Naoto is smart and analytical.

Kanji Tatsumi is a first-year student at Yasogami High School in Inaba. Many know him as a notorious liar since middle school.
Kanji appears to be a delinquent but was strong enough fight a biker group in middle school. He earned a town-wide reputation for his wildness and toughness. To express the punk-ish style he wants to portray, he wears his school uniform over his shoulders. When he gets upset, he can be threatening to get into fights with people.

Kanji's delinquent behaviour is actually a cover for the fact that he enjoys hobbies others consider feminine like sewing or cooking. He told his father that he wasn’t like a man, because he obsesses over sewing, knitting and crafting. This made him appear to be a fake. Because he is a father's boy, he was able to fight the biker groups to prove his masculinity. He doesn't care enough about his mother to mention that his mother is in the hospital.

Kanji has many hobbies but this the side of Kanji that he tries to hide. He loves sewing and knitting. He has been a keen artist and crafter since childhood and continues to improve his skills even though no one knows.