Alaz’s garments, once bright, patterned, and colorful, now dulled by mud and blood. The stains of which form new filigrees, new intricate inscriptions of death. So too are her stories. Drenched in bloodshed, unrecognizable from their first times told. But they all start the same: a merchant who set sail from an unfamiliar land, sisters bound by twisted fate forced to follow him. The sails limped, the trade winds failed to blow, and the merchant revealed the evil within him. Trapped on still waters, each day of the voyage was marked by new horrors. Alaz witnessed her sisters wither in pain, finding peace only in the cold embrace of the sea. She promised to avenge their misery and unleash the storm.

At the Port of New Orleans, the rich greeted them as they disembarked. A mansion they had dubbed the Sultan’s Palace had been prepared. Food and drinks were plenty, enough to satisfy any gluttonous desire, and melodies from Alaz's homeland joined the rich music in the streets of New Orleans. Debauchery deafened ears and blinded eyes.

It was not long until the wind howled, the port waters boiled, and Alaz prepared herself to greet the merchant in his chamber once again, but with Pride’s Death in her hand. She carefully tore at muscle and flesh, taking his pride, and leaving him bleeding out on his bed. Her dress bloodied, she joined the guests in the main hall to grant them a quick death with the merchant’s precious rifle, Shahmaran.

When the storm died out in the morning, a river of blood gushed out the Sultan’s Palace into the storm-swept streets. The citizens of New Orleans discovered the bodies piled in the hall. And when puzzled minds started asking questions, Alaz had already spent her first bounty on a weapon she dubbed Sister’s Anguish.

The Concubine
As Alaz’s reputation grew, her past became a bloody fairytale, her present soaked in blood and mud. She chases a future molded by hatred and vengeance; a future she promised to herself and her lost sisters. 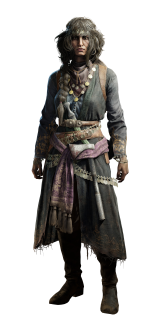 Sister’s Anguish
When Alaz earned her first coin as a free woman, she bought this Hand Crossbow. Adorned with mementos of her fallen sisters, Alaz wields it with their enduring strength.

Shahmaran
The inscription on this Sparks LRR imbues only a worthy wielder with the strength of its namesake, an ancient myth. No wonder it called to Alaz and fell into her hands.

Pride’s Death
The Merchant's Heavy Knife, embedded with the coins of his travels, was just the thing Alaz needed to put the man in his place. Hours of anguish and torture later, the former concubine had her prize.